All information provided below taken from USCIS’s own announcement, available here.

USCIS expects to announce an estimated 31 award recipients in September 2012.

Are you interested in knowing how we can assist you with your naturalization process?  We can help!  Contact Swaray Law Office today at 763-549-0670 and learn of your options.

All information on this story taken from FoxNews.com

A Honduran citizen living in Los Angeles was wrongly deported in October, and went on to die in last month’s massive prison fire in his home country, immigration officials said Friday.

Nelson Avila-Lopez, 20, was mistakenly deported in October, and was one of the 360 inmates who died in the Feb. 14 fire at the Comayagua prison in Honduras, U.S. Immigration and Customs Enforcement told KPCC radio in a statement.

Four years earlier in an attempt to avoid gang recruitment in Honduras, Avila-Lopez crossed the border illegally at age 16 to be with his mother in Los Angeles, KPCC reported.

Don’t allow yourself or a family member be wrongly deported. Call upon Ed Swaray today at 763-549-0670 and find out what your options are. 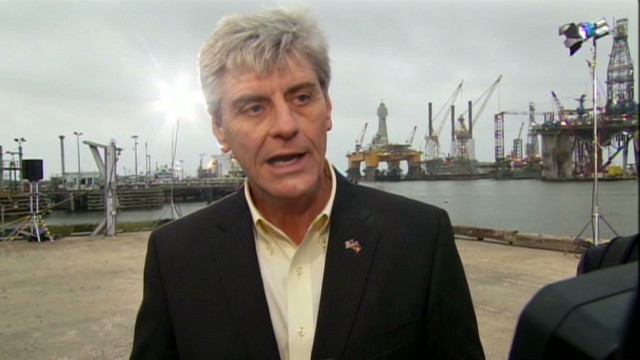 (CNN) — Another controversial immigration bill is on the horizon in the South, a regional battleground that has seen a number of states pass reforms on illegal immigration.

The bill now goes to the Senate for approval, where it is also expected to pass. Both the House and Senate are controlled by Republicans, who won majorities last year for the first time in 140 years.

Gov. Phil Bryant, a Republican who supports the measure, said he believes too little has been done on immigration policies and a crackdown is urgently needed.

To read more about this story, please click here. 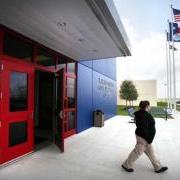 All information below taken from the article by Guillermo Contreras as it appeared here.  Please click the link at left for the full article.

KARNES CITY – Federal officials say it is the first-of-its kind “civil” detention center in the country built from the ground up, designed to make the immigration detention system more humane.

Critics say the $32 million facility, known as the Karnes County Civil Detention Center, is not needed.

The center, unveiled on Tuesday, was built as part of an agreement between the U.S. Immigration and Customs Enforcement and Florida-based The GEO Group, which already runs a jail here. It spans 29 acres and has 608 beds, with the capability of expanding to 1,200. It will hold nonviolent, low-risk adult men apprehended in Texas. Detainees will start arriving this month.

Are you currently detained?  You may be able to be with family and friends while awaiting your court date with immigration officials.  Call Ed Swaray today at 763-549-0670 and learn what your options are.

All information below courtesy of the Montgomery Advertiser.

A federal appeals court Thursday blocked two sections of Alabama’s immigration law, which is known as HB 56, in­cluding one that had been par tially enjoined by a U.S. Dis­trict Judge in Montgomery.

The 11th Circuit Court of Appeals enjoined Section 27 of the law, which forbids Alabama courts to enforce contracts be­tween unlawfully present aliens and parties who know their immigration status.

The appellate court also blocked Section 30 of the law, which forbids state and local agencies from doing business with undocumented aliens.

For more information on this article, please click here.

Are you in need of immigration assistance?  Let Swaray Law Office help you with all of your immigration issues.  Call today at 763-549-0670. 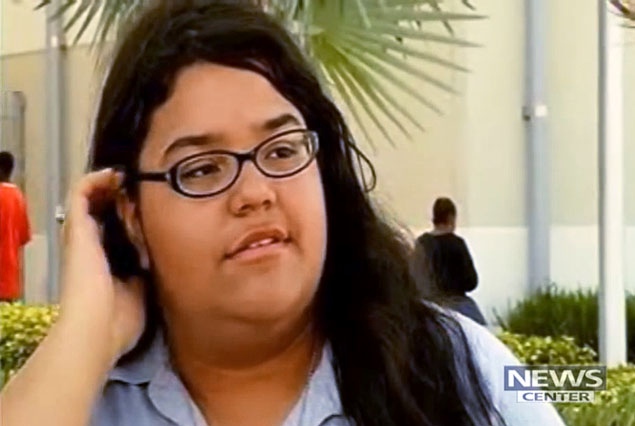 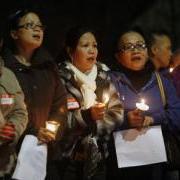 HIGHLAND PARK — Saul Timisela was ordered to report to U.S. Immigration and Customs Enforcement in Newark early Thursday morning to be deported.

Instead, the Indonesian Christian took sanctuary at the Reformed Church of Highland Park, where the Rev. Seth Kaper-Dale is trying to save all at-risk Indonesian refugees who fled their country to escape religious persecution more than a decade ago.

Timisela may have felt safe given ICE’s historical reticence to raid churches where illegal aliens are being harbored. But at the same time, he was sorry to say goodbye to his wife of 10 years — another Indonesian Christian now in hiding because she has overstayed her visa and does not have an open case with the immigration agency.

For more information on this story, please click here.

Do you have a pending deportation order? You may have options you have not considered. Please call Ed Swaray today at 763-549-0670 and learn of your options. 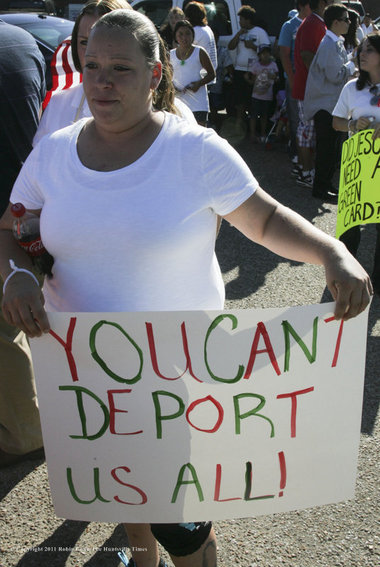 Tamitha Villareal (shown above) gets ready to lead a march of protesters of the new immigration law in Athens, AL.

ATLANTA, Georgia — The law that put Alabama in the middle of a national debate over immigration goes before a federal appeals court in Atlanta today, pitting Alabama against the U.S. Justice Department and a coalition of civil rights groups.

A three-judge panel of the 11th Circuit Court of Appeals will hear 30 minutes of arguments – 15 minutes per side – by lawyers for the Justice Department and the State of Alabama. Two of the judges were appointed by Democratic presidents and one by a Republican.

To read more on this story, please click on this link.

Are you in the United States illegally? Learn what your options are now by calling Edward Swaray at 763-549-0670 today! No matter how complex your issues, we can help.

Students, educators and lawmakers plan to gather at the Georgia Capitol to protest legislative proposals that would ban illegal immigrant students from state colleges and universities.

The ACLU of Georgia, the Georgia Undocumented Youth Alliance and the Georgia Latino Alliance for Human Rights oppose Senate Bill 458.

To learn more about this story, please click here.